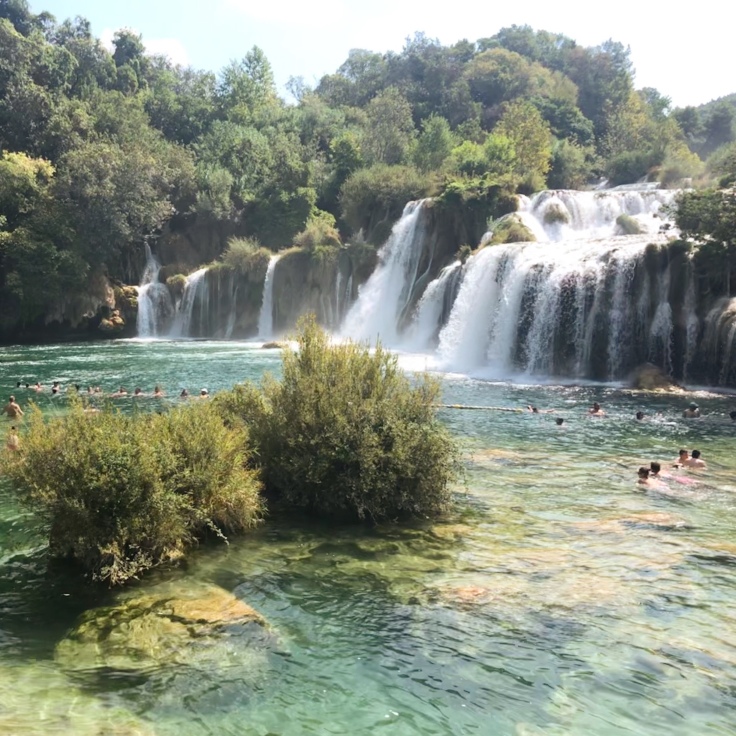 In the summer – which right now feels like a lifetime ago – I was lucky enough to visit the beautiful country that is Croatia. Myself, my boyfriend and two of our closest friends headed there for 10 days, and we certainly made the most of our trip. In this post, I’m going to share with you some of our favourite experiences and the hidden gems that you’ll no doubt love too!

So, let’s get straight to it. With so much on offer in Croatia, we decided to ‘split’ our trip in two – pardon the pun. We had five days in – yep, you guessed it – Split, and five days in a small town on the outskirts of Dubrovnik. Here’s a little diary of everything we got up to.

In search of some relaxation in the sun on our first day, we headed straight to our nearest beach: Bacvice. It was small yet popular, and this meant that space on the sand was relatively limited. With lots of small bars and restaurants close by, however, it had  plenty on offer for our first few hours in the country. 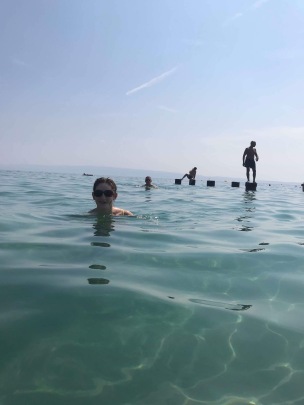 The water was calm, but given the number for people taking to the sea to cool off, it wasn’t all that clear. So, snorkelling here doesn’t prove all that successful! One advantage of Bacvice beach, however, is that the sand is soft underfoot. This may sound strange, but a lot of beaches on Croatia’s coast are quite pebbly. If you have special beach shoes, then you don’t need to worry about lugging them to this particular beach.

Despite being easy to get to from Split, if you’re looking for a little idyl, then as we learned, it’s definitely worth making the effort to catch a ferry to one of the country’s small islands.

That’s exactly what we decided to do on our second day. Hopping on the hour ferry from Split, we set off to one of the islands closer to the mainland: Brac. The ferry takes you to right into the small harbour, and there are a handful of quaint and interesting shops to explore as soon as you set foot on dry land. As for us, we headed straight to the beach. It was about a 10-minute walk from the stop and was much quieter than the beach in Split. The water was clear, which made it better for snorkelling, but the beach shoes certainly came in handy.

Again, there are a couple of places to get snacks and refreshments nearby. All in all, we had a wonderful time in Brac and would recommend it to anyone visiting North Croatia.

Fancying a change from the beach, on the next day we decided to book a coach up to KRKA National Park. Yes, this is the one where you are allowed to swim. On arrival, you – and many other tourists – have to walk one way through the woodland on a slatted path. And as you can imagine, taking photos and walking can sometimes be quite tricky, especially as the wooden slats are something of a trip hazard. Don’t be put off, though. If you want to get the perfect snap, try not to let the impatient crowd deter you from stopping for a moment. 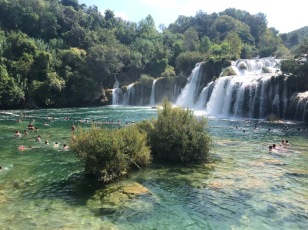 After about a 45-minute walk, the path suddenly stops and you come to a large open area framed with wooden refreshment huts and a place to hire a locker to store valuables. This area can be quite busy, as it’s the main place where people can enter the swimming zone. It also leads to the bridge with the best view of the waterfall.

As you can imagine, there are usually quite a lot of people cooling off in the lake. So you might find it doesn’t quite look like it does in the postcards. If you’re braving a dip, I would recommend heading where it’s quiet. This will give you the chance to get used to navigating the varying depths of the water and the slippery rocks. Also, be aware of the current caused by the flow of the waterfall; it’s definitely stronger than I’d expected!

Aside from this, I’d say that visiting KRKA is definitely a must on a trip to Croatia. It is breathtaking and quite unlike anything I’d ever seen before.

If you go to Croatia, it’s likely that you’ll overhear a conversation about Hvar. Phrases such as celebrity haunt, luxury and lavish might just reach your ears. And it doesn’t disappoint; there are numerous yachts in the harbour and fancy eateries along the water. If you’re looking for a beach like we were, however, then it doesn’t have that much to offer. Fortunately for us, this was the push we needed to decide to hire a small boat for the day.

Hvar, you see, sits next to a series of small islands called Pakleni Islands, and hiring a boat gives you the freedom to explore these idylls and their surrounding waters at your own pace. We made our way around their shores, stopping for a bit of snorkelling every so often. We enjoyed our lunch on the boat and were able to chill and sunbathe at our leisure. Given that the waters around Croatia are usually beautifully calm, this is a perfect holiday activity, and I would even go as far as to say that this was my favourite thing that we did!

As I have already mentioned, we decided to split our holiday into two parts: five days in Split and five in Dubrovnik. And don’t let what might seem like hassle put you off. There are buses you can catch from Split Bus Station, and they take about 4-5 hours. While this seems like a long time, it’s definitely worth it – and the view from the window isn’t exactly boring, either. The bus runs right along the coast and through Bosnia (so in theory, you check another country off your bucket list). Do make sure you have your passport to hand, though!

We stayed in a little town called Orasac, and again, we were really lucky with our Airbnb. It was a small apartment with a pool and great views over the sea and hills. We were about a 20-minute bus journey from Dubrovnik.

Here, we spent a lot of time chilling and catching some rays. We felt we needed this after  all of the exploring that we’d done in and around Split.

We headed into Dubrovnik three times during our stay. It was beautiful, but as you would imagine, it’s was very busy. As you cross the narrow bridge and enter the gates into Old Town, you’d be forgiven for thinking that you’d stepped back in time. Yes, the worn marble tiles and the quaint, narrow streets are born from an entirely different era. It’s therefore quite jarring when you turn a corner and see tonnes of Game of Thrones memorabilia and a replica iron throne.

If you’re interested in the popular HBO TV series, then you’re not short of choice when it comes to tours. We did the ‘Get Your Guide’ walking tour, and it was actually quite informative. They’re all probably very similar, however. We picked our tour because it said it included a ticket to the outer wall. Don’t be fooled, though, this does not get you onto the city wall. It might seem obvious now, but when you’re researching tours, I would say this is a pretty easy mistake to make.

As for the city wall, though, we climbed it on our second-to-last day in the country. It’s 200 kunas each – and it’s definitely worth it. The views are breathtaking, and it’s great to get multiple perspectives on the architecture below. We walked on a thundery day, and a mixture of black sky and sun made the orange rooftops glow. It was stunning, and following the path all the way around is a good way to feel as though you’ve seen the whole of the Old Town. I would say doing this is a must!

So, if you’re after a holiday that both relaxes and fulfils your intrepid nature, Croatia is an amazing choice. The weather is largely great, the cities have a wealth of history and culture and there is plenty to explore.

As for accommodation, we used Airbnb and found that both of the apartments contained everything we needed. The owners were on hand at any point, and we were able to reach out to them for food and activity recommendations. Hotels in the country and on the surrounding islands can be quite expensive, so I’d definitely take a look into Airbnb if you’re thinking of going. We stayed here in Split and here in Dubrovnik. Both had great locations, were clean and cosy, and great value as well.

Now, I realise that I haven’t even mentioned the food! I will be writing and uploading an account about this soon, as it’s definitely worthy of its own mention.

In the meantime, I hope you enjoyed this post!